The water had just come up by 6 inches due to the salmon pass flushing water, with the extra pace on the water I decided to use a 3 inches per second sink tip rather than my normal 10ft intermediate tip. The intermediate tip sinks at a rate of 1 to 1.5 inches per second just a bit to slow for the faster water and seeing as I was hugging the large rocks I needed the faster tip to get down and move a few fish from their lies. It started working very well as I was getting the odd pull and seeing fish pitching out of the way of my fly.
The salmon hit the fly hard and fast pulling line from the reel and heading back down stream.I moved  back upstream into a more comfortable position where I knew I could exit the water fast just in case it was a good fish, using a small switch fly rod can have it's draw backs especially with high water and strong fish because you don't have the same muscle power as a proper 13 or 14 ft salmon fly rod. Seeing that the fish was only about 7 lbs I bullied it back into the pool and knowing that I was using 10lb flurocarbon tippet I was able to bring it into shallow water and beach it on the grass verge. Holding the salmon for a couple of minutes to allow it gain back it's strength I eventually released it back into the river.There has been a very good run of salmon over the past few weeks but getting the really fresh sea liced salmon at the dam is proving hard and as time moves on practically impossible with all the coloured fish in residence. Might treat myself to a day on the Blackwater or Bandon for a nice fresh fish before the season ends.
Posted by Paul Hanley at 15:04 No comments:


The water was about 6.3 on the gauge great water for salmon fly fishing especially as the clarity was good but not so good if one is targeting salmon on a very small dry fly. The pace of the water was causing the fly to drift unnaturally fast so I had to give a few false mends into the line to facilitate a drag free drift. The salmon are being heavily fished at this time with anglers spinning , shrimping, worming and even the odd fly being thrown across them so they are hugging the bottom and staying out of harm's way. Early in the morning or again at late evening they are moving about and this is when they can be targeted with dry fly. My set up is simple a 5wt soft action fly rod using a floating line and about a 3ft furled leader of about 7lb breaking strain copolymer combined with a 9ft tippet of 6 or 5x tippet and a size 18 barbless dry fly. Some size 18 hooks won't take a 5x tippet because of the thicker diameter so you have to step down to a 6x instead so a soft rod has to be used to protect the lighter tippet.
There is still enough back bone in the 5wt to turn a salmon but I would recommend that if anybody is thinking of trying this they'd be better served fishing for large rainbows on the same tackle first to get a feel for the rod , line and fly size in dealing with the bigger fish. It's very easy to bend one of these dry fly hooks but there is a balance between playing a fish fast and breaking the tippet. I played the salmon hard and landed it on soft weed before removing the barbless hook and holding the salmon for release. It is very important at this time of year to hold a fish a bit longer and let it recover well before releasing it back into the river. I hooked and released another grilse later on in darkness using the same method, it worked well for me last year and the harder the fishing pressure gets this seems to be the best method for catching heavily pressurised fish.


Having been away from fishing for the last few months due to Covid 19, I was delighted to get a few hours salmon fishing on the Lee. Unfortunately the water conditions were challenging to say the least with low clear slow water and a lot of weed floating downstream clogging up the line and fly. Concentrating on the known salmon lies I kept casting in and around some of the large boulders and slowly retrieving line to give the fly some movement and hopefully excite a fish into a take. Grilse and fresh salmon like fast moving flies and sometimes will follow a fly halfway across the stream before taking it.Imparting some form of movement can trigger a fast reaction and I had a few pulls at the fly before eventually hooking up to a small grilse. The fish gave a great account of itself jumping and cartwheeling up and down the river before I finally beached it and held it for a few minutes to allow it to recover enough to return it back to the river. I was using a 10ft intermediate tip with a 6 ft tippet of 5kg flurocarbon attached to a size 15 allys shrimp fly. Unfortunately lately it has become hard to fish at the dam with large groups of people fishing there without permits. It's very annoying not being able to fish down the river with so many people there sitting on croys static fishing and not having paid to be there while others having permits can't get access to fish.
Posted by Paul Hanley at 17:45 No comments:

Just a few photos that I took while visiting the angling show in Dublin. We went there for some fly tying materials and saltwater fly gear but unfortunately there was very little there in saltwater fly rods and reels just one to be honest. At least we got our fly tying materials and a few accessories etc. We arrived early so the photos show some of the stalls just as the crowds were arriving. 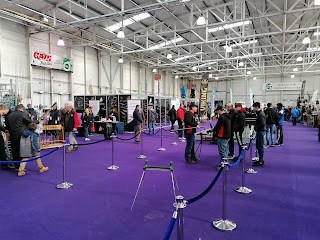 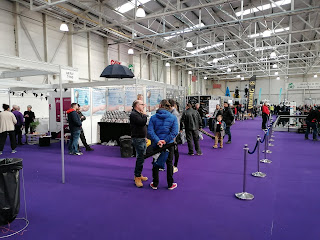 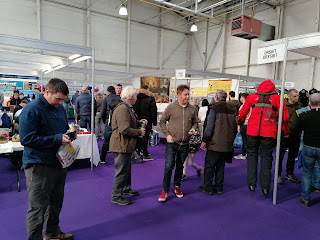 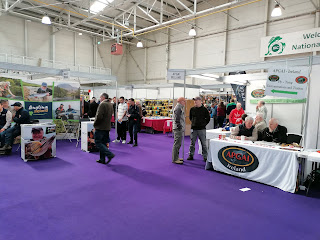 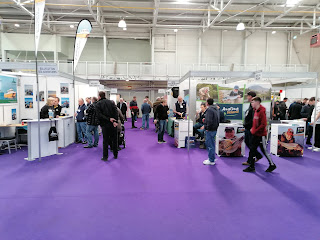 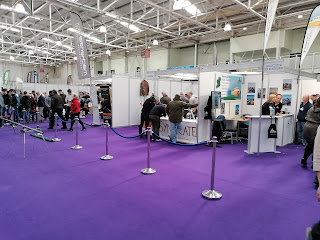 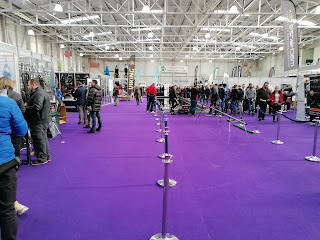 The star of the show was this magnificent Eagle. 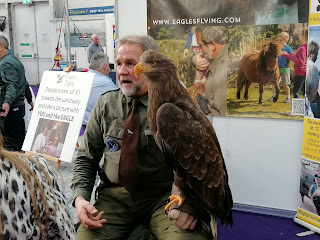 I  checked online and found that Andrew Ryan had a show just up the road so we went there and got the saltwater fly gear with a discount thrown in, over all a successful day out.
Posted by Paul Hanley at 06:03 No comments:

Just some photo's to show the water level yesterday  the 14th of February prior to Storm Dennis arriving. It was hard fishing with a very strong current running down the center of the river which kept dragging the spinners into rocks etc. basically little or no control on proper depth or tracking. At least the tickets are available but to be honest with the rain that's due over the coming days it's going to be hard planning any type of fishing until the weather improves and water drops.. The biggest issue while fishing this evening was clarity or in my case lack of it, visibility was down to only a foot so even if the Flying C had headlamps on it and bumped a fish nothing was going to happen. At least a couple of hours out in the open with plenty of fresh air will clear out the sinuses and cobwebs. Here are a few photos showing the clarity and water height. 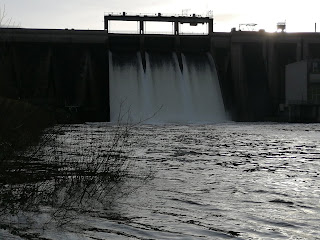 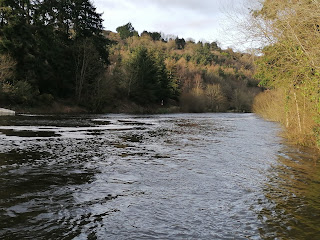 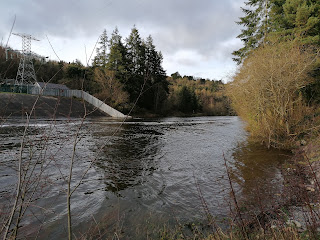 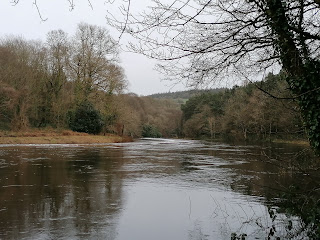 The bottom photo shows the river Bride height and clarity. 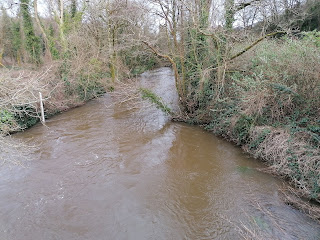 This is going to be a very short post as again for another year there were no permits available on opening day. Heading downstream there were some club anglers dusting off the cobwebs on their fishing tackle and enjoying the fine weather but the Inniscarra salmon fishery was quiet and empty. Here are a few pictures showing lovely water ( about half load ) ideal for the fly with just enough pace on it to fish a tube well through the entire beat. Maybe next year we'll get a cast on opening day but I wouldn't put a bet on it. Hopefully we'll have a good salmon season this year with good water level's being maintained throghout the year. 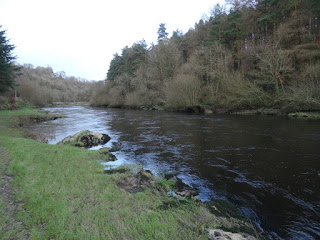 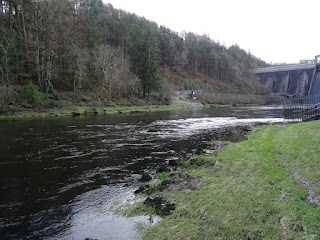 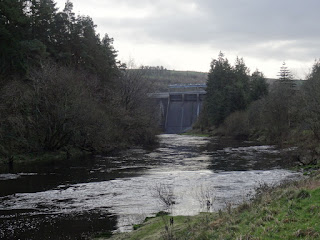 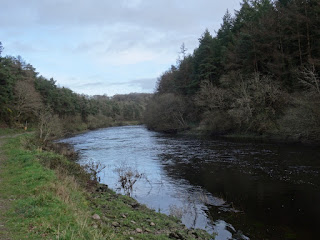 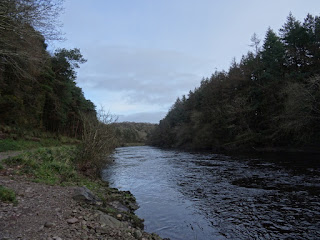 
Sunrise on another salmon fishing season on the Blackwater river. I arrived just as the sun was peeking above the hills , the river was at a nice height around .78m on the gauge and runnng very clear. I had a cast on lower Kilmurray with my spinning rod and touched a fish ,more than likely a kelt as there was very little positive contact and it was off. I fished up the beat casting at all the likely spots but to no avail. Fishing upper Kilmurray for about half an hour and again no contact so I decided to head down to Kents for the last cast as I had to be home by 12.30. Fishing down kents I hooked and landed 4 well mended silver kelts and a number of well conditioned brown trout, all were released bank into the river. The weather was perfect and about 10 degrees, a beautiful day to be on the river and even better a few pulls to get the excitement levels raised. I didn't hear of any fresh salmon being met but there were the usual stories of fresh fish being seen on the days leading up to the opening day something akin to "you should have been here yesterday". Here are a few pictures of the river and some of fish, none fresh but we'll take what we're given on such a glorious openng day.

Looking down to lower Kilmurray 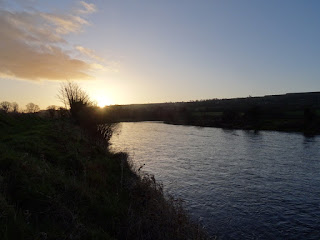 The island at lower Kilmurray 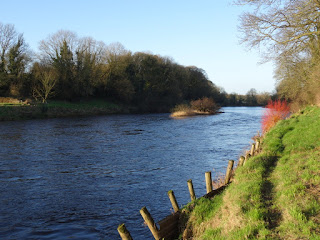 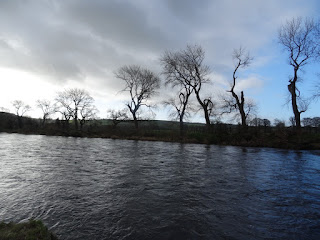 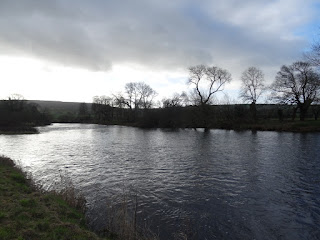 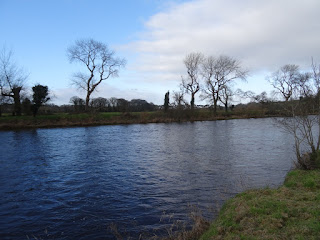 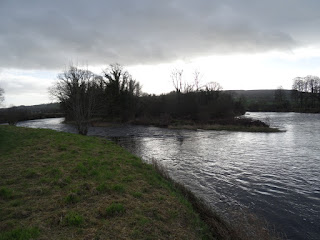 Having fished the top of the island stream I decided to move on down to Kents beat.
The lower half of Kents Beat where I caught and released the kelts. 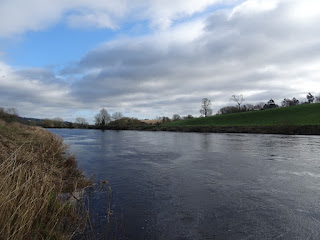 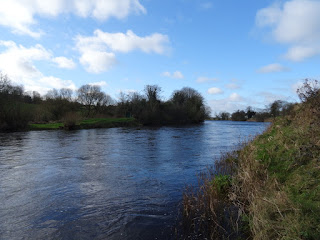 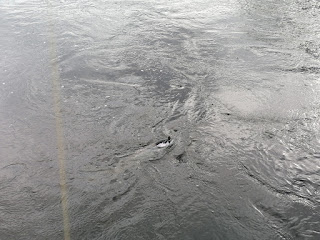 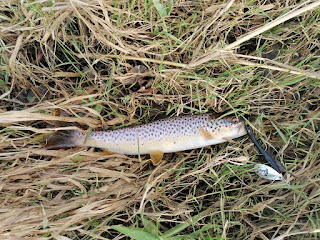 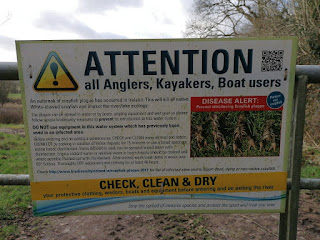 Hopefully all anglers will adhere to the signs.
Posted by Paul Hanley at 18:14 No comments: